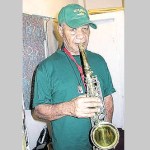 His daughter, Carol Bennett, said he passed away at home in Rollington Town, East Kingston. He had suffered from hypertension for years and was recently diagnosed with prostate cancer. Born in Central Kingston, Bennett learned music at the Alpha Boys School. Leaving after 12 years at age 16, he played in several bands and was an established session musician by the early 1960s. He was a member of producer Leslie Kong’s house band in February 1962 when a 16-year-old singer named Robert Nesta Marley approached Kong to record songs for his Beverley’s Records. Kong produced Marley’s first song, Judge Not, with Bennett on sax.

Bennett played on other Kong classics, including Derrick Morgan’s Forward March and Hurricane Hattie done by Jimmy Cliff, another teen singer destined for greatness. Throughout the 1960s, he played on some of the biggest songs from the ska and rocksteady eras, including Delroy Wilson’s Dancing Mood which featured his signature solo. Other noted songs Bennett played on are I Want To Go Back Home (Bob Andy);Dancing Shoes — The Wailers; I’m The Toughest — Peter Tosh; Love I Can Feel— John Holt; I Shall Be Released — The Heptones; and Full Up — Soul Defenders.

He lived in Canada for several years before returning to Jamaica in the mid-1970s. His career got a second wind during the early 1980s when he recorded and toured with the Roots Radics Band. It was during that period that he got the nickname ‘Deadly Headley’. In 2005, he was awarded the Order of Distinction by the Jamaican Government for his contribution to Jamaican music.