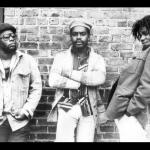 The Mighty Diamonds belong to an exclusive fraternity of three-part harmony group singers that emerged in the mid-1960s in Jamaican popular music and lasted into the next decade. Earlier, The Heptones, The Techniques, The Paragons, The Melodians, The Wailers, and The Gaylads had laid the foundation for the phenomenon, which produced a plethora of hits, mainly in the rocksteady and early reggae styles. Those who were around at the time and close to the action will well remember the enormous impact songs like Party Time by The Heptones, My Jamaican Girl by The Gaylads, You don’t care for Me by The Techniques, On the Beach by The Paragons, Swing and Dine by The Melodians, and Trench Town Rock by The Wailers had on party fans and music lovers Island wide. By 1975, The Mighty Diamonds were continuing the excellent trend of three-part harmony singing, which had been set the previous decade with the hit singles I Need a Roof, Have Mercy, Back Wey Mafia, Pass the Kouchie, Stand up to Your Judgement, Heads of Government, and Right Time.

The Mighty Diamonds first came together in 1969 with members Fitzroy ‘Bunny’ Simpson, Donald ‘Tabby’ Shaw, and Lloyd ‘Judge’ Ferguson. According to Bunny, who I had on a radio interview in 2005: “We started at Greenwich Street corner in Trench Town. My mother used to have a shop there and so we started there. Then we moved on to some talent shows at places like Bohemia and Memory Lane clubs.Following that, we were taken to studio by Jah Lloyd and recorded our first song Girl Tou’re Too Young for Rupie Edwards’ Success label, but him (Edwards) have this song sitting on like a chair until Stranger Cole come in and give us our first release called Oh No Baby.”

In the meantime, Jah Lloyd had given them a song called Shame and Pride in 1973, which they recorded for Randy’s Records. Although not making much of an impact in Jamaica, it became a big hit in England, along with another cut titled Country Living. So even before the Channel 1 days of the mid-late 1970s, (the period when the Mighty Diamonds was at their best) they were already well known in England. The Channel 1 Studios, situated at 29 Maxfield Avenue in Kingston 13, came to undisputed prominence in the mid-1970s mainly through the works of The Mighty Diamonds. The studio took the reggae world by storm in 1975, with the release of the Diamonds’ Right Time – a recording that drew heavily on the principles of Marcus Garvey deeply and which was influenced by an earlier recording by The Burning Spears titled Marcus Garvey. ‘Bunny’ Diamond further reinforced the point when he said in the interview: “The Burning Spears sorta influenced us as many of our songs were on the theme of Marcus Garvey”.

Right Time also introduced the innovative double-drumming style of Lowell ‘Sly’ Dunbar and heralded the dawn of a completely new style of reggae rhythms that became known as ‘rockers’.
With a classic line-up of top-flight musicians in attendance, suddenly it appeared as if the whole rhythmic structure of 1970s reggae was going through a remodeling phase. Many thought that the Mighty Diamonds’ sound revived memories of the 1960s Studio 1 days, and in particular the vocal harmony of the Heptones. In a real sense, it may very well have as the leanings of Channel 1 on some Studio 1 foundation bass lines created some anxious moments between Brentford Road and Maxfield Avenue. Studio 1 boss Clement ‘Coxson’ Dodd retaliated with Sugar Minott’s I Need a Roof and Woman is Like a Shadow, both Channel 1’s recordings. The Mighty Diamonds follow-up at Channel 1 Studios – I Need a Roof Over My Head – on producer Joseph ‘Joe Joe’ Hookim’s Well Charge record label, was no less devastating as it rocked the nation from east to west and from north to south. Again drawing on the teaching of Garvey, the 1976 recording warned:

“Remember weh Garvey say
Remember weh the righteous man say
Time a go dread
Every gully a go run red.
I need a roof over my head
And bread on my table
with love in my heart
with love, oh love for everyone.”

The group’s definitive three-part rocksteady and reggae harmonies, together with their superb songwriting skills and their knack for addressing pressing issues of social disorder, has been listed as three of their hallmarks of success. Their 1978 recording Stand up to Your Judgement further addressed social disorders as they warned in the titled song that:

“Oppression is what you make it,
Life is so hard and tough.
If you don’t change your ways
The penalty you must pay.”

The group’s unforgettable 1976 release of Have Mercy was a fervent plea for help, as they sang:

STANDING ALONE
Known in the reggae business for their sweet soulful harmonies and constant hits, The Mighty Diamonds literally stood alone as a singing group between 1975 and 1980, dominating group, singing reggae at home and abroad. Their achievements could not escape the attention of the overseas recording giant Virgin Records, who in 1976 struck a deal with producer Hookim and the group. It resulted in the release of their debut album, Right Time on the international market. The success of this venture led to Virgin sending the group to New Orleans to work with veteran producer Allen Toussaint. The album Ice on Fire was the result of that collaboration. By 1981, the group was working with producer Gussie Clarke. This collaboration yielded perhaps the most popular recording of their career: Pass the Kouchie. Based on a Studio 1 rhythm, titled Full Up, it became a massive hit for the English group, Musical Youth, who altered the topic to Pass the Dutchie.