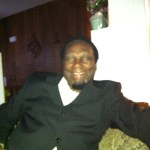 Ferdie Brown was born in the Franklin Town  section of Kingston, Jamaica.
He was musically inspired by his mother as everyday he would hear her singing the song “Single Girl” by Sandy Posey. As it turned “Single Girl” became his first record purchase, bought at Randy’s Records for 9pence in 1966, a record he still owns today. As he got older he started to go to dances around town and listening to the different sound systems of the day. Bunny Goodison’s Souls Shack became his favorite. Ferdie migrated to Canada in 1972 where he hung out with Count Lasher and Winston Dicko Detroit. In 1975 he started his own set named Love Bird Intl. and started out playing at a few weddings and Dances. The rest is History! His favorite artists are Dionne Warwick, Ken Booth and Jerry Butler